Home > About Us > Pavlova History
Where did it all begin?
Some sources claim that the recipe for pavlova originated in New Zealand, while others claim it was invented in Australia. However, like the Anzac biscuit, the earliest known books containing the recipe were published in New Zealand.

Professor Helen Leach, a culinary anthropologist at Otago University in New Zealand found a pavlova recipe in a 1933 Rangiora Mothers' Union cookery book. Professor Leach also has an even earlier copy of the pavlova recipe from a 1929 rural New Zealand magazine.

Keith Money, a biographer of Anna Pavlova, wrote that a chef at a hotel in Wellington, New Zealand, created the dish when the ballerina visited there in 1926 on her world tour.

The claim that it was an Australian invention states that the pavlova is based on a cake baked by Bert Sachse at the Esplanade Hotel in Perth on 3 October 1935. Sachse's descendants believe he may have come up with the recipe earlier than that, since Anna Pavlova visited Australia in 1926 and 1929 and died in 1931.

What is pavlova?
Pavlova is made by beating egg whites to a very stiff consistency before folding in caster sugar, vanilla, and vinegar, and slow-baking the mixture to create the meringue. This makes the outside of the pavlova a crisp crunchy shell, while the interior remains soft and moist. 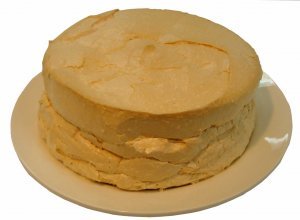 Further reading
Leach, Helen M. (1997). The pavlova cake: the evolution of a national dish. In Harlan Walker (ed.)
Food on the Move: Proceedings of the Oxford Symposium on Food and Cookery, 1996 (pp. 219-223). Devon, England: Prospect Books.