Home > About Us > Pavlova History > Anna Pavlova
Below: Photographic postcard of Anna Pavlova as Aspicia in the Petipa/Pugni The Pharaoh's Daughter, circa 1910 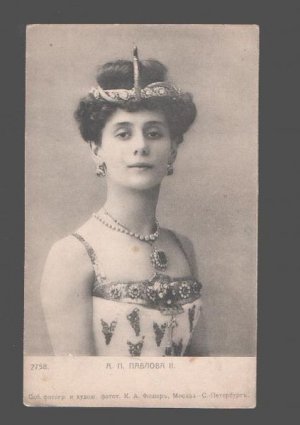 Below: Anna Pavlova as Nikiya in the Grand Pas Classique of the Shades from Act III of the Petipa/Minkus La Bayadčre, circa 1902 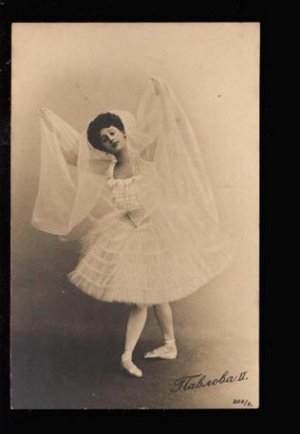 The Pavlova dessert was named after Anna Pavlova, although its origins continue to be debated. Both New Zealand and Australia have claimed the credit. It is believed that a chef at a hotel in Wellington, New Zealand, created the dish when Pavlova visited there in 1926 on her world tour. The white dessert was meant to replicate her tutu.

Pavlova was born in St. Petersburg, Russia. At the age of eight she was rejected from the Imperial Ballet School because she was too small for her age and was asked to return when she reached her tenth year. At age ten, she entered the school, and in April 1891 danced in her very first performance as a cupid in Marius Petipa's A Fairy Tale. She trained under some of the greatest teachers of the day: Christian Johansson, Pavel Gerdt, Nikolai Legat, and the great Ballerina Ekaterina Vazem (creator of the role of Nikiya in La Bayadčre), and graduated in 1899 at age 16, being allowed to enter the Imperial Ballet a rank ahead of corps de ballet as a coryphée. She rose through the ranks quickly, as she was a favorite of the old Maestro Petipa. She was second soloist in 1902, Premičre Danseuse in 1905, and finally Prima Ballerina in 1906 after a resounding performance in Giselle, for which Petipa revised the Ballerina's dances especially for her (they are still performed today in this version at the Mariinsky). She was much celebrated by the fanatical balletomanes of Tsarist St. Petersburg. Her legions of fans called themselves the Pavlovtzi.

Pavlova forever changed the ideal for ballerinas. In the 1890s, ballerinas at the Mariinsky Theatre were expected to be strong technicians, and this usually meant a strong, muscular, compact body. When prima ballerina assoluta Mathilde Kschessinska became pregnant in 1901, she coached Pavlova in the role of Nikya in La Bayadere. Kschessinska was certain Pavlova would fail miserably in the role, as she was considered technically weak. Instead audiences became enchanted with Pavlova and her frail, ethereal look. Pavlova was thin and delicate-looking; she was perfect for romantic roles such as Giselle. Her feet were extremely arched, so she strengthened her pointe shoe by adding a piece of hard leather on the soles for support and flattening the box of the shoe. At the time, many considered this "cheating." But this became the modern pointe shoe, as pointe work became less painful and easier for curved feet.

In the first years of the Ballets Russes she worked briefly for Serge Diaghilev. Originally she was to dance the lead in Mikhail Fokine's The Firebird, but refused the part, as she could not come to terms with Stravinsky's score (the role went to Tamara Karsavina). By the mid 1900s she founded her own company and performed throughout the world. Sadly, she often chose to dance 'pretty', self-choreographed dances to insignificant and often sentimental music. She was considered by many people to be supremely unintelligent (unlike Karsavina, with whom one could converse about anything, Pavlova showed no interest in anything but her next performance). These faults, however, were as nothing when compared to the incandescent beauty of her dancing, her bourees like a string of pearls, as the ballet writer Cyril Beaumont put it.

Her most famous showpiece was The Dying Swan, choreographed for her by Michel Fokine, danced to "The Swan" from Carnival of the Animals by Camille Saint-Saëns. View a video of Anna Pavlova in The Dying Swan, Kirov Ballet, 1907 by going to the website youtube.com and typing in the search function "Anna Pavlova".

She died of pleurisy in The Hague, Netherlands while touring, three weeks before her 50th birthday. Anna said "If I can't dance then I'd rather be dead. So can you prepare my swan costume?"

In accordance with ballet tradition, on the day she was to have next performed, the show went on as scheduled, with a single spotlight circling an empty stage where the dancer would have been. She was cremated, and services were held in a Russian Orthodox Church in London before burial in Golders Green Cemetery in London. Her remains were moved in 2001 to the Novodevichy Cemetery in Moscow in accordance with her requests and after considerable controversy.